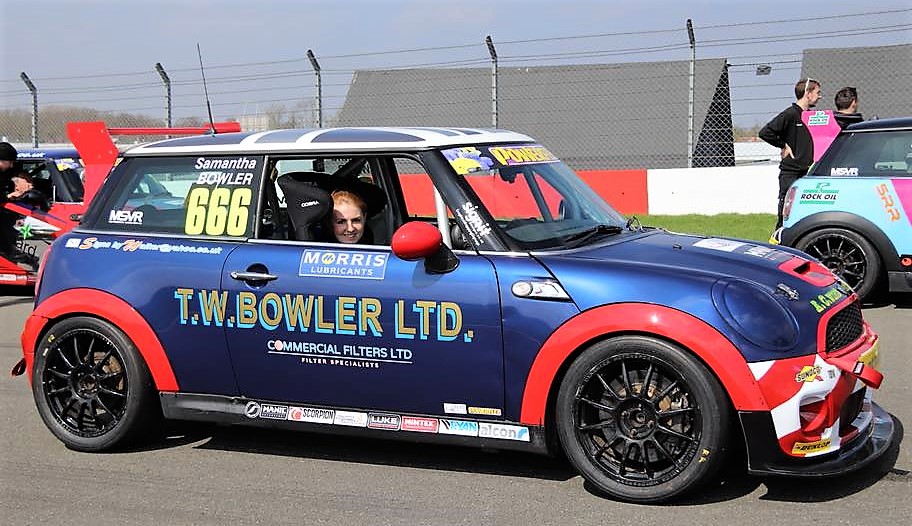 Racing driver Sami Bowler might be speedy but she’s also got stamina. The Morris Lubricants racing ambassador talks about being part of the female minority, the power of adrenalin and what she’d like to hurtle round the race course next

Dare to blink and you’ll miss Sami Bowler’s mascot hanging on for dear life in the back window of her Mini.

“My number is #666, so I have a red devil teddy wearing a cape strapped to my roll cage,” says the 28-year-old driver, who was the fastest woman on four wheels at 2019’s Citreon C1 24 hour endurance race.

“I tried out for an all girl team and we finished 5th out of 100 – it was intense but the 24 hours of adrenaline was unreal.”

Receiving the accolade for maintaining the swiftest speed throughout the duration of the race, Sami has proven that she’s not one to dawdle. Currently, and impatiently, waiting to zip herself back into her HRX suit (complete with Morris Lubricants logo) and start testing her Mini after a complete rebuild, her pre-race ritual is notably restless.

“I’m sick of dusting my race gear, I hate sitting and waiting. On the grid I tend to be the last in the car after pacing to try and get rid of the butterflies.”

Self-funded and self-taught, Sami only joined the UK’s 5% of female race licence holders in 2018. Since then she’s taken the Ladies Cup trophy in the Mini Challenge, as well as secured four podium finishes and won fourth place overall in the championship. She’s also been nominated for Club Racer of the year 2019, Club Team racer of the year 2019 and the British Women Racing Drivers Club's GoldStar Award 2020.

“I got my race licence, bought my car and competed, all in the space of a year. I spent my savings doing it and it was a massive learning curve in terms of racing and mechanics. I’m now trying to raise funds to support me in my third and final year of the Mini Challenge Cooper S Class. It would be amazing to win the championship, but I think top 3 overall is a fantastic goal. To better our Citreon C1 24 hour 5th place position would also be incredible.”

Working more than the average 9 to 5 as a transport manager for her family’s heavy haulage company, Sami has limited time to hone her craft.

“I quite often only get into the seat on the Friday before a race weekend. I was a late starter at 26, so I’m proud of what I’ve achieved in the short time that I’ve been racing. To be getting on the podium with professional racing drivers who have been competing for many years, I am proud of my achievements! I do better than I ever imagined.”

Working full-time in the HGV industry where women make up just 8% of the workforce, and only 1% of drivers, Sami aspires to be an example to other women both professionally and competitively.

“I’m not phased when I have to stand my ground in a grid full of men. When your race helmet is on, we are all just drivers. I try to inspire people to be the best they can be on and off the track, and promoting women and embracing what they do on a day to day basis is important. The industry is very supportive and encouraging.”

There’s still a little way to go though. Once told she was defending too aggressively by a male competitor, it wasn’t until Sami analysed the race footage that she realised the critique may have been motivated by something else.

“I analysed the footage from the whole weekend and it was the first time in my career that I had not just opened the door for him. I stood my ground like he always did with me – you learn fast when you get to that point when you are a threat to their podiums. I just kept smiling as that's when my podiums started.”

Going forward, Sami plans to compete in a machine with a much mightier internal combustion engine than she’s used to.

“I am not the 'content' kind of girl. I always strive for bigger and better things, and am always setting new goals. Although my mini will always be my first love, I would like to race different vehicles – my next goal is a race truck.”

“It is lovely to have the support from Morris Lubricants. I always try to be a proud brand ambassador whether I am at work, at the track or out and about.”

Describe yourself in three words

Is disappointing myself – I am my one worse self critic.
How do Morris Lubricants support you?

They provide the best products for my car to ensure everything is working at its best.
If you could have told yourself a piece of advice at the start of 2019 - what would it have been and why?

To believe in myself and keep pushing as it will pay off.