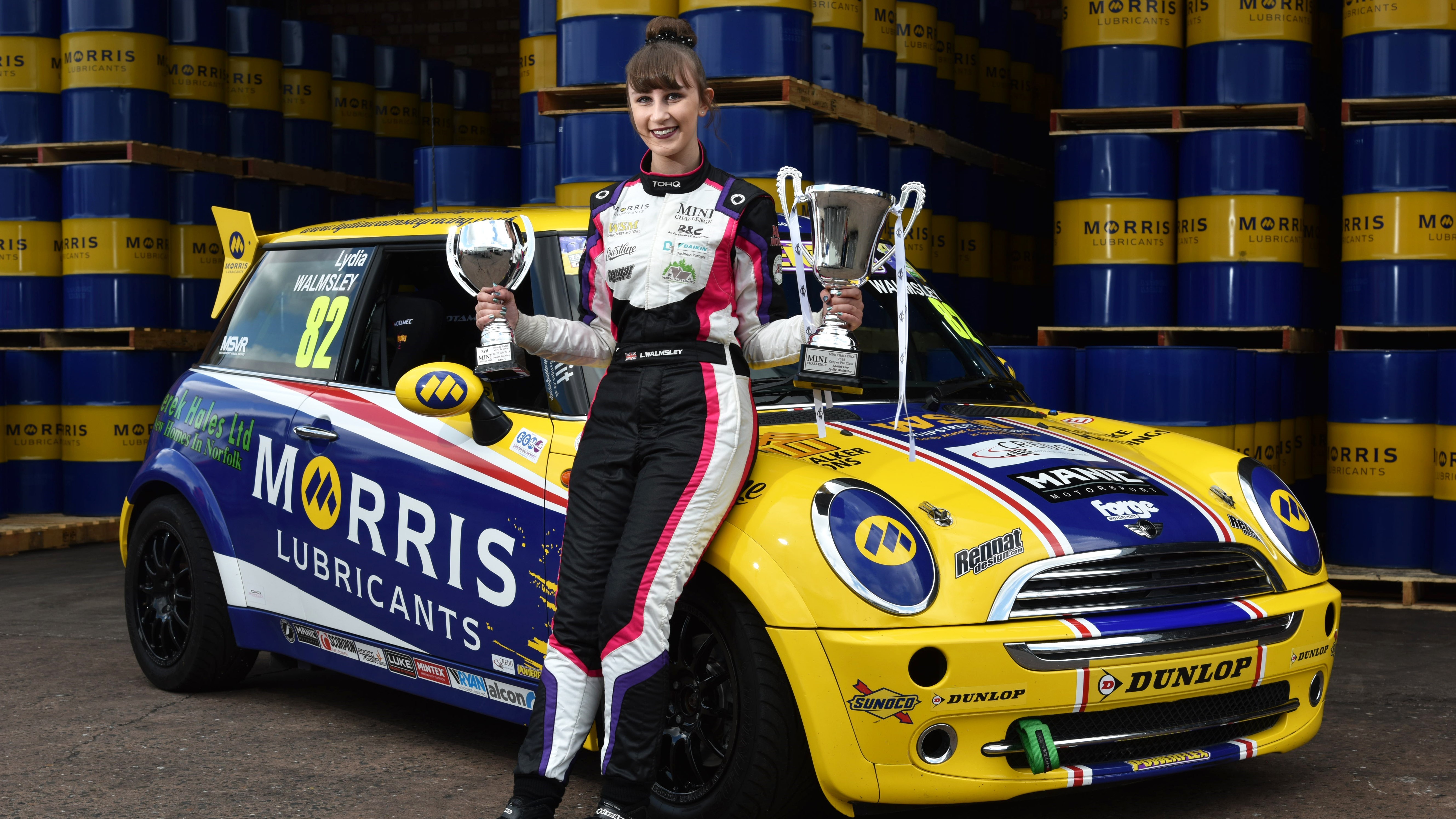 Morris Lubricants brand ambassador Lydia Walmsley talks about her career, hopes for the future and how much her work with the oil and lubricants specialist means to her.

Motorsport can provide a challenging environment for young drivers. However, for Lydia Walmsley, competing in the Mini Challenge championship is made easier thanks to her partnership with Morris Lubricants.

The company is supporting Lydia as she looks to progress through the ranks of British racing, a journey that the 17-year-old started just ten years ago.

I was always into dance when I was younger,” Lydia recalls. “It was at the age of seven or eight that I started showing an interest in motorsport. My dad raced since before I was born, competing on oval tracks and winning championships, so I’d been around racing for so long.

I think it was meant to be if I’m honest because I was surrounded by it all the time. My Dad said he would get me into a go-kart, so we went to Buckmore Park, and that’s how my journey started.”

And start it did. Lydia completed the Bambino training course before starting to race at her local indoor track in Ipswich when she was eight. “I did that for a year, becoming vice-champion and losing the title by a point, which was gutting!”

From there it was on to outdoor karting at Ellough Park, before starting in cars when she was just 14, in the Junior Saloon Car Championship (JSCC). “There are very few junior championships, so we chose the JSCC,” Lydia comments. “Then the Mini Challenge seemed like a good step for us. You can start senior racing when you are 16, so as soon as I was, I moved up into the Mini Challenge. We chose it as it was quite similar to the Citroen Saxo that I raced in the JSCC – both front wheel drive. The only real change was the slick tyres that we now race on in the Mini Challenge, but we thought that there was such a great route as there are so many different stepping stones from the series.”

Lydia currently races in the Cooper Pro class, with the John Cooper Works (JCW) Class the next step.

Lydia’s ambitions do not stop there: “I’d love to be racing in the British Touring Car Championship (BTCC),” she mentions when asked what her future might hold. “I’ve been watching it since I was a very young girl and the racing seems so close. I’d also like to do things like presenting on the television and get my instructors licence as well, so I can teach others on the track. But if I’m racing, I want it to be in the BTCC.

“The championship goes to all the tracks in the UK, and I’m familiar with them. Plus, it’s the top tier of British motorsport, and the racing is so close. It seems like such a fantastic atmosphere, so it’s something I’d love to be a part of.”

This year, Exeler8 Motorsport, the company that builds and runs the Mini Challenge championships, has also built a BTCC challenger. Champions from the Cooper Pro and JCW series will win the opportunity to test the car at the end of the season.

To get to the BTCC takes experience and knowledge, something Lydia is gaining in her time racing in the Cooper Pro series.

“Last year was such a big learning curve, not just for me but for my team as well. They’ve learnt a lot about the car set-up especially. Even though the Mini was fairly similar to the Saxo I’ve raced before, there is still a lot to learn on the mechanical side of things. I’ve learnt more about car handling.”

Mistakes also contribute to experience, and perhaps Lydia’s biggest lesson came at Cadwell Park last year. “I rolled the car there, in the qualifying round,” she reflects. “It wasn’t the first time I have done that, it happened in the JSCC, and the accident at Cadwell wasn’t as big. But it did damage the car significantly – we couldn’t take part in the race, and repairs were only finished on the morning we left for the next event!”

Accidents like this have not knocked Lydia. “Missing the race due to that incident made me even more determined to do well in the next round,” she says. “I’m sure I’ll be learning more in 2019, but I do think last year has put us in a good place for a really good season.”

It is this determination that has seen Lydia appointed as a brand ambassador for Morris Lubricants. Approaching them at the Autosport International show a few years ago, the Lubricants specialist now features heavily on the Mini Lydia races on tracks around the UK.

Morris Lubricants have been amazing; they are so supportive. They are such a big company as well, and it is fantastic to be associated with them. I appreciate their support. I’ve only been with them for a year, but in that time, they’ve done so much for me, and they seem really interested in motorsport as well, which is fantastic.

“We had the Mini on their stand at Autosport International in 2019, and we’ve wrapped it this year, so the name appears across the side of the car, a great advertising space.

“A lot of what I do is advertising their products. We use their lubricants in our car, and they allow us to perform excellently and without fault. We do a lot of social media for them, as we do for all our sponsors, but Morris Lubricants have got so many fantastic products for all different types of vehicle. So, it’s good to be able to promote their brand.”

Morris Lubricants to are pleased with the work Lydia does for them, and happy to see her gaining more experience as she looks to progress through the motorsport ranks.

“Lydia has been a shining example to all young motorists who want to achieve. She works tirelessly not only on the track but as an ambassador for Morris Lubricants as well, which is why we are delighted to continue working with her,” says Andrew Simms, Marketing Executive.

“As a young lady that not only has her racing to think about but also her education as well it is great to see such dedication and focus when others might falter.”

This year Lydia is hoping to be challenging at the front in the Cooper Pro Championship, having achieved a 9th place overall in her debut year. “There’s a lot of new people this year joining the championship, so it’s difficult to judge how competitive we will be next to everyone else, but I think our last year has put us in great steed for this season. I want to be on the podium and right at the front,” she says.

The young racer also hopes to be an inspiration for others, especially women, who are looking for a career in motorsport. “There is not a lot of women in motorsport especially so perhaps if I can show that a woman can get to the top doing both the driving and other aspects then that would be great. It’s fantastic to see so many women starting to come through but it’s not enough, to be honest, and I think sometimes people don’t think they can get into motorsport, and don’t know how. So, if they can see someone doing it and doing it well then that would be great.”